Some football with that rum?

Going to see an International football match in Trinidad is an experience. Normally a game scheduled for 5.30 would open doors and welcome in spectators one hour before. Not here.  The gates opened at 12.00pm and there was no allocated seating so people were encouraged to come early.  The game was an International between England and Trinidad and headlined the slogan “A Score to Settle.”  Two years previously during the World Cup in Germany, England had eliminated Trinidad and their dreams of reaching the quarter final. Now it was time for revenge.

I should mention what happened when Trinidad even qualified for the World Cup. This was an event of such magnitude that on the Monday following the victory all schools in Trinidad were declared closed for reasons of celebration.  This is the little country that could and they are seriously proud of their team, the Soca Warriors.  A day of revelry and dancing in the street to celebrate being part of the World Cup is once again a symptom of how much these people love to party.

Nobody seemed inconvenienced about the 5 hours required sitting time before the game started. Unlike my own thoughts that went in the direction of afternoons wasted and time ill spent, the Trinis saw this as a big lime!  Bring in the coolers filled with rum and spend the afternoon in the stadium. Basically it was that or the beach. 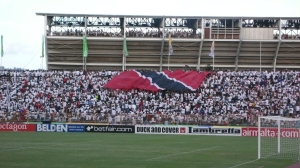 We arrived at 3.30, having seats fortunately saved for us while we were at another sports function featuring 11 year old girls.  I can’t imagine many places allowing large coolers to be brought into a stadium but it took us at least an hour just to enter the stadium between the bags, the umbrellas and all the people lined up to get in. As we climbed the stairs we were drawn by the scent of Doubles and Cow Heel soup simmering in food stalls that both cooked and served fresh food. There was no fast food, not a burger to be found.  We finally found our group and spend the next 2 hours eating, drinking rum, watching the players warm up, talking and laughing. The atmosphere was of a huge party.  The crowd was so thrilled that England was coming to take them on and were dressed in the home team’s colour, a sea of white.

The Adonis Beckam did his victory lap after playing one half and each time a Trini player touched the ball with his toe the crowd went wild. Being English I was supposed to cheer on the St George flag but somehow I just couldn’t.  We were sitting behind a group we knew of young English supporters decked out in flags, face make up and appropriate t-shirts and each time England scored they glared at me, looking for my patriotic spirit.  But I just couldn’t summon it up. I wanted Trinidad to win, or at least score once! They deserved it so much more than the English who hadn’t even made it to the Euro.  And the English who couldn’t beat anyone could just come over here and beat the one easy team, get an ego boost and trample some Trini spirit in one fail swoop?

No, I wanted the little island to score and I was getting hoarse with the effort.

The final score was 3-0 to England and while they may have puffed out their chests with pride there was no Trini spirit trampled that day. They left that stadium filled with rum, song and the memory of a great lime.

One response to “Some football with that rum?”