17 years ago today my handsome husband and I moved our facebook status from “single” to “in a relationship”. Woops. That doesn’t work; there was no facebook back then. In fact I can’t believe it has been 17 years considering I don’t feel much older than 22.  How did 17 years pass by so quickly? Although, if you think about it, an awful lot has happened in the last 17 years, but thinking about that too much makes me feel old. Now when two people who love each other want to make it official, they just click a few keys and Facebook announces it to the world; back then, in the dinosaur years I think we just sent an email letter home and told everyone about this great guy/girl we met and wow! Actually if my 22 year old daughter wrote me an letter email telling me all about this guy she met on a beach in Egypt I would probably gulp, try hard not to panic and remember that I did exactly the same thing.

We did meet on a beach in Egypt, Dahab, in fact, back in the days when there were no hotels in Dahab and it was still a Bedouin village where travelers and hippies congregated for a few weeks days facing the red sea, climbing Mt Sinai, playing tons of backgammon and enjoying the local herbs pita. I was travelling with my close friend from university, Charis, and we had started our round the world trip in Cairo. In fact, to begin at the beginning the person who is truly responsible for this adventure was a great travel agent at STA. When posed with the proposed itinerary of Israel, India and the USA she suggested (thank God!) that it would be far cheaper to fly to Cairo, overland it to Israel and then fly on from Cairo to Bombay. We hadn’t even considered a trip to Egypt in our plans but jumped at the chance to add another country to our post university, pre responsibility round the world trip.

Once in Cairo, where we arrived on January 16th 1992, we met two very handsome guys biking around Egypt. Regaled with tails of sleeping in desert tents and escaping from packs of hyenas, we followed this Swedish and Scottish pair all over Cairo. With promises to meet them in Dahab we left Cairo after one week and headed to a very cold and expensive Jerusalem. In fact, Israel, however wonderful it was, proved too cold and costly for us and we headed to Dahab anxiously awaiting the arrival of our two intrepid cyclists. As often happens when travelers meet and make grand plans, they didn’t turn up but Francois did. We met at sunset on some worn and shabby sofas overlooking the red sea. The sea was pink, the sky was pink, the sand was pink; it was all very rosy. 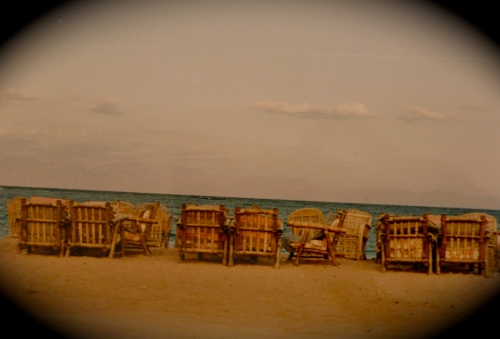 We met on January 31st and two days later on 2,2,’92 we climbed Mt. Sinai.  A group of us decided to climb up, sleep the night there (although there was barely in sleeping accomplished in the freezing stone hut) and wake to see the sun rise from the top of Moses’ mountain. It was beautiful beyond words.  At that time, we were simply friends; in fact it was my friend, Charis who had her eye on him. I was busy being determined NOT to fall in love on this trip. However by the time we reached Aswan on February 13th love was all I had in my mind.

We had delayed our departure for India until the 22nd of February so that the three of us could sail the Nile in a Faluka, visit the Valley of the Kings and Queens, cycle to the Aswan Dam and generally explore Egypt together. It was an auspicious and remarkable start to our relationship. When it was time to bid farewell (Charis and I went to India and he was going to Europe)  we were windblown, sun kissed and cupid shot to the extreme.

We would not see each other until May 2nd when he drove down from Montreal to meet me for a few days in Cape Cod. Then it was another separation until September when we moved to France together. In our 4 months apart, while I was in London and he was in Montreal, trans-Atlantic phone calls were extortionate and there was no email, facebook, twitter, blogging or texting to keep us connected. Unfortunately he was not handy with a stamp but we managed with our weekly Friday phone calls to keep the fires burning.

17 years later I am thinking back to that night in Aswan, a full moon throwing her light into the room, our first kiss, the beginning of an incredible life together that has taken us from Egypt to France to Montreal to Winnipeg back to Montreal to Trinidad and now looking towards Uganda. It is a story that surely gave my parents some sleepless nights.

“What! You met some French Canadian guy on HOLIDAY and you are moving where with him??”

Yet it is a story that lives in us and in our two daughters and one that echoes with every step that we take.

Filed under Family Stuff, How old am I?, personal, Travel