I picked up a book in London that was intended for my daughters. It looked to be one of those books that is essential to have in any home that wants people to know how the world was made and what is carbon and why do stars twinkle and things like that.  What I didn’t realize it that this book was made for me! It explains everything in an easy to understand format with pictures and the odd cartoon and best of all, Mr Bryson’s witty and excellent writing style that I have always enjoyed.

Bill ( we are on a first name basis now ) wrote a book called A Really Short History of Nearly Everything. It is a big blue book that has been on my Must Read list for sometime now. When I found the Perfect for Young People format of the same book I very nearly jumped up and down in the bookstore in London ( where you will find the best book stores in the world, hands down) and jumped up and down a bit more when I saw that it was 50% off!

So I lugged it home in my heavy suitcase, showed my daughters who raised their eyebrows in that “Not Another Book That Explains The World” way and left it on a table to gather dust or be used as an impromptu tray, which ever came first.

Then I picked it up and I suddenly became a very clever person, and by clever I mean that I now understand nearly everything about the world and how it came to be and how extraordinary and somewhat like a miracle that it is that we are all here at all.

These are some of the things I have learnt from Mr. Bryson. (Bill).

1.When the Big Bang happened, it involved a single event where in 3 minutes the universe went from nothing, to 98% of everything, resulting from an explosion of energy that came from an infitessimly small squeezed in combination of proton and matter. Too small to imagine and too blinding to comprehend. So it is okay that I don’t completely understand how this all happened.

2.The Moon was created when a huge meteorite hit the earth and a large fragment of our crust was dislodged and became our Moon! Since we have a centre of hot molten lava and the Moon does not, we have all the necessary gasses conducive to life and the Moon does not. However, were it not for the Moon, we would be wobbling like a dying spinning top and we would all be very dizzy or dead, so thank you Moon.

3.There are molecules ALL around us. And it is the rubbing together of those molecules that creates the heat that we need and like, especially in hot countries near the equator where the earth bulges out and is not perfectly round.

4.1% of the Static on the tv is actually ancient remains of the Big Bang. ( not sure I really get this, but now the static is certainly more interesting.)

5.Pluto is so far away that if we were to go there, the sun would look no bigger than a shining pin head.

6.Pluto, far from being at the edge of our solar system, is actually barely 1/5000th of the way to the end.

7.Space is so huge that were we to visit our nearest neighbour in the cosmos it would take us 25,000 years.

8.It is not how much the earth weighs but how people figured it out that is most interesting.  It took a lot of men, but ultimately we have to thank Mr. Newton.

9.We all came from a muddy, oozing protein soup and we all have to thank bacteria and gravity and the atmosphere and the fact that the earth is just the right distance from the sun, not an inch to close or too far, and that the sun is just the right size and not too big or any smaller and that we have a hot core that were we to sink a well and drop a brick to the centre would take 45 minutes.

10.It is simply a miracle that out of the whole universe we came to exist through a sliver of a chance on a planet that is just perfect for habitation. This, despite the fact that we are lucky enough that there is any land for us to live on since the earth should really be called Water. By the way, we only live on half a % of the planet’s surface. 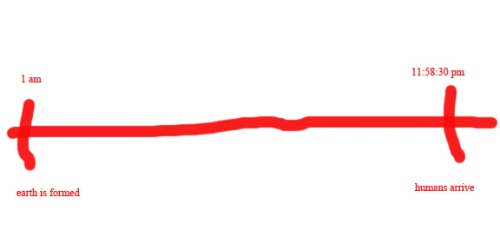 (Did you enjoy my easy to understand explanation of how long us humans have been around? Merely one minute and a half.)

And that is only a little bit of what I have learned! Thanks to Mr Bryson, it is all a whole lot clearer now.

Filed under Lying in bed with books, Miss Teacher

Tagged as A really short History of nearly everything, Bill Bryson, learning, planets, Pluto, the big bang, the earth, the moon, universe

2 responses to “Thanks Mr. Bryson”