A tale of two worlds

The teenage years are a slow slipping through the fingers of control. Ever so slowly those little girls who were once glued to the hip are now keeping secrets and living in their own little worlds.

People often ask me, how can I possibly cope teaching teenagers? Aren’t they rude, smelly and all together quite awful? The truth is that I really love teens. I love the enthusiasm, the raw energy, the budding intelligence, the swirling hormones, the fact that they are on the cusp on adult hood. Plus no one is smelly, if anything those boys seem to bathe in Axe.

The other evening I witnessed a mating ritual, that resembled the great meeting of the peacocks. It was the final night of CAISSA, a sports event that unites several Caribbean International schools. While I was mere feet away in the auditorium watching the elementary school music festival ( a few screeching violins and my beautiful daughter singing a solo) the gym was brimming with unrestrained teenage joy. Our school had just won the girl’s basketball championship and the music was nearly as loud as the cheering. With little time to spare, showers were taken and people were dressed to impress, for there was young, fresh and very handsome blood in the building. The teens walked circles around each other, flashing smiles, batting lids and giggling behind hands. The boys from Caracas and the Dominican Republic were smiling and looking around, the girls from Trinidad were doing their own mating dance. The contrast between the sweet innocence of the auditorium with the brave display of young talent performed for eager parents and the loud sexy gym was one that gave me pause. I sneaked out of the music festival, accidentally missing the choir performance (a sin for which I paid dearly) to revel in the fresh talents of my teens.

The two worlds collided in the photos I looked at later that evening. My photos of earnest children dressed in black and white looking fearfully into the limelight were suddenly interrupted by the puffed and pruned teens standing around the gym. Those little eager sprouts making their parents proud would soon enough be ruffling their feathers for the opposite sex.  I have one little ball of sweetness singing her heart out for me and then before my eyes her sister is slipping into that great big world of peacocks. 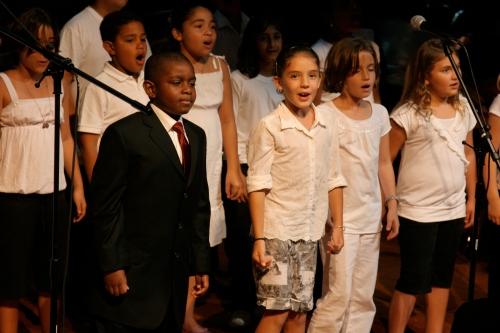 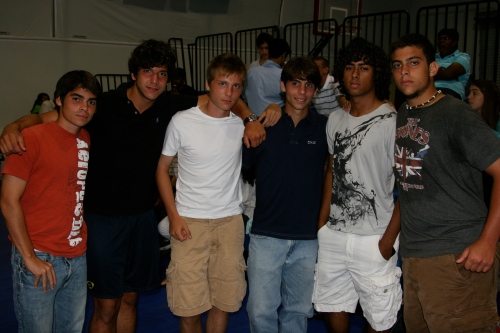