Into the dark depths of Owino market 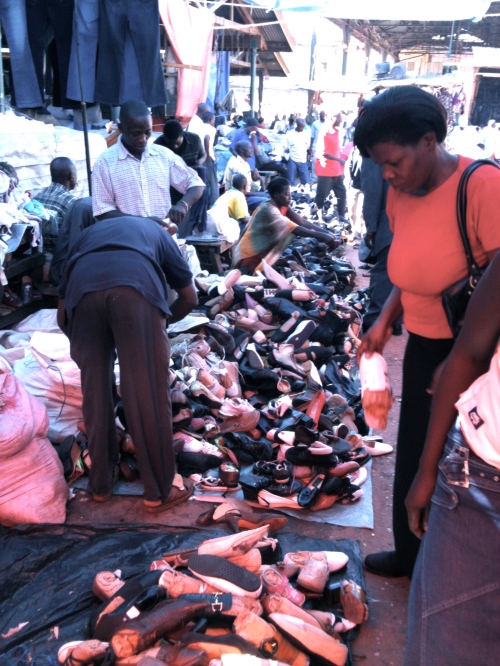 Well I finally did it. I went to Owino, the largest market in Uganda. It is a weaving, postulating maze of stalls selling all manner of objects from paper clips, to shoes, wedding dresses to suits, chickens to belts and dried fish to hats. It is where the majority of clothes from Western charity shops end up together with some seconds and the left overs that never sold in Winners. Some people love it and treat going there as an extreme sport, equipping themselves for a trip into murky hell, coming out for air only  when bags are stuffed with “finds” that will be washed and worn or taken to the tailor to be reworked. There are others that stay away as if from the plague saying they “hate that place” and “I’ll never go back in there.” Either way it draws a reaction when you say that a trip is planned. Everyone comes out with some advice. It seems the best tips are these:

When four white chicks enter the maze they stick out like sore thumbs and the excitement level in the stalls raises just a friction as they realize a big sale might be imminent. Luckily I went with a pro who knew where to park and where to enter and most importantly where to go. If I had gone alone I would most certainly have got lost and might still be there now, trying to claw myself out under mountains of old shoes. 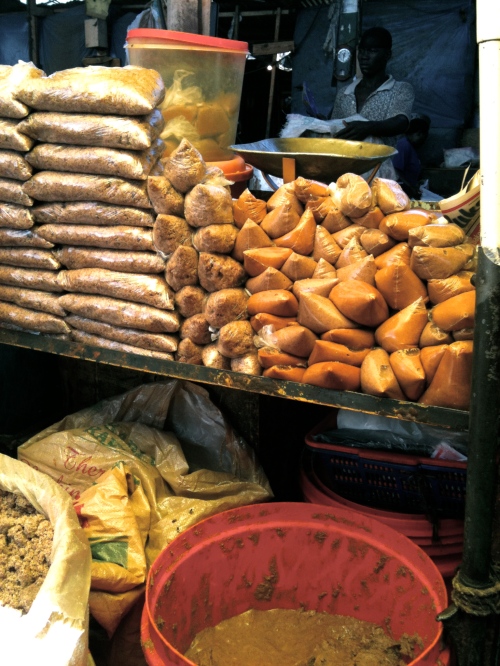 As I entered, with some trepidation, not being entirely clear what I would find, the smell hit me first. It was a heady cocktail of dried fish, peanut butter, old clothes, cooking and body odour. There were many nut stalls grinding  ground nuts into thick pastes ranging in colour from anemic red to mustard brown. As we entered one small covered path we saw hundreds of shoes, some piled high, some laid out, and behind each mini stall sat a man scrubbing the shoes, trying to make them look new again. In another corner were piles of bras, bathing suits and in another a small hill of children’s clothes. Few of these items were new; I kept expecting to see some item I had dropped off at Goodwill or Oxfam some years ago. These clothes arrive in huge grey plastic sack and are unceremoniously tipped onto either a tarpaulin or a table. Some are torn but some are in decent condition. I saw French Connection dresses and Marks and Spencer’s suits but the highlight of the morning was the “dress man”. Thanks to him I have now found out where bridesmaid’s dresses go to die. One after another we pulled out a frightening mixture of tuille, frill and pastel. A few times we even found a few classic ‘mother of the bride’ dresses; items worn once, well intentionally and then stuffed into the back of a closet never to be seen again, ‘till now. We looked at these dresses with a mixture of shock and laughter. It was an education in bad taste and I will forever wonder how, if she is your best friend, you could ever have forced her to wear that. 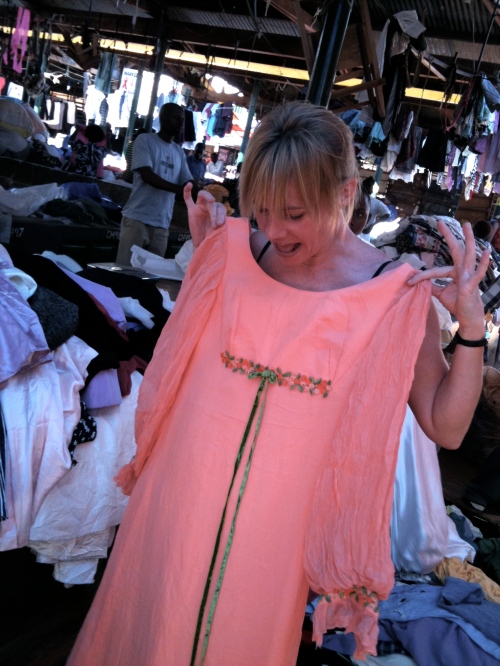 In the end we each came out with one or two pieces, some for a laugh and one or two things we might actually wear. I, however, believe I won the treasure hunt having found these fabulous red shoes! What a find!

As we were leaving we got trapped by a large truck trying to enter the market. I can’t imagine what he had in his mind, since there is no where that a truck could feasibly go. As he tried to get out of his predicament people were scrabbling to get their clothes, shoes and carrots out of the way of his large wheels and we couldn’t get around the front nor the back of the truck. We just had to wait while people stared at us and laughed at our frustration. After all, what was the big rush? When Trooper was touched on her arm by a man I yelled at him to get off. “But she is so pretty, so soft!” he replied, once again rubbing his hands over her arm. I was hot, sticky, tired and in dire need of a shower. Two and a half hours had been enough.

Will I go back? Maybe, it is a treasure trove of dressing up clothes and a fantastic place to scour for drama costumes, but it won’t be too soon. I have had enough Owino for the time being.

Plus did I mention I have a sort of second hand clothes phobia? I do, something to do with the person’s spirit staying in the clothes. I know, crazy. But that is another story.

Filed under I miss shopping., Kampala

5 responses to “Into the dark depths of Owino market”