Marking? Tick. Reports? Tick.  I am on a slippery water slide heading for the finish line; before I know it Year One will be behind us all.  Last Saturday saw an extravaganza at school aptly named Fun Day. It saw Princess dancing on stage despite her one armed status, it saw Handsome Husband taking his turn as parent of the day at the Parent’s Sports Relay; hopping along with one leg tied to a virtual stranger, his muscles put to the test in the “pull a swimmer” challenge in the pool. I did my turn as cheerleader and happy observer. There was no point in both of us breaking a sweat! Sunday saw us at two parties, one for a delightful four year old, one where we watched England disgrace themselves on a football pitch. I think the four year old bouncing on a rubber castle was more coordinated then most of those over paid grown men kicking a ball.

In the mean time I have started to salivate over the pretty things awaiting me in London. If you know me at all by now you know that I am a frustrated shopper and lover of shoes. A good friend warned me that after being in Africa for close to a year without a break it is advisable to resist all shopping for three days. Yes, hide the wallet for three whole days. So I have turned to the nets for some early anticipatory temptation. Rather like looking at the dessert menu upon arriving at a restaurant  without a care for price, nor calorie.

Look at the lovely things I have found.  I am guilty of coveting. Of course there is an air of being sensible, after all these items do need to return to Kampala and be worn, most likely in a classroom or an event where they will suit. Silly heels are out of the question, obviously.

A Lovely number from Jigsaw here. And another one below: 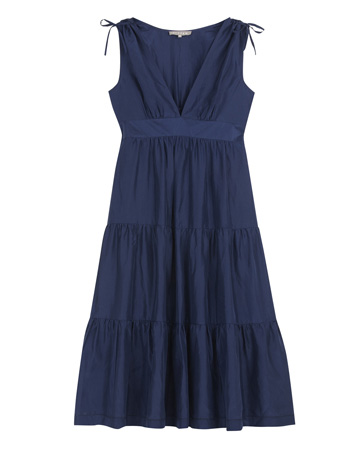 This one is a pretty little number from Mango.

Yes those will do very nicely. ( From LK Bennet.)

Lovely pair of Pied a Terre Sandals below.

And then this.. Swoon… It is called Friday dress and it is by Anglomania.  Price upon waking up.

I am now going to return swiftly to reality with a attack of the dishes and a sponge bath for the aforementioned one armed Princess.

Filed under I miss shopping.

3 responses to “Oh so lovely”